In our last few days on Bali we stayed in Candidasa and visited the traditional village of Tenganan, a walled village where traditional crafts, including specific techniques of ikat weaving and etching are still practised. Surprisingly when we arrived we found that most of the chickens in the village had been dyed using luminous pink, orange and yellow food colouring. Why? Apparently just for fun! From Candidasa we took a Bemo to Padang Bai, a small port town where we were to get our boat to the Gili Islands. Boats are slightly notorious for sinking in Indonesia, due to poor safety standards and to the location being at a point where two oceans meet and the currents are unpredictable. So, when we arrived in Pandang Bai to find that one of the ferries had crashed into the pier two days before and there were lorries backed up for miles, we felt slightly uneasy about our impending crossing. 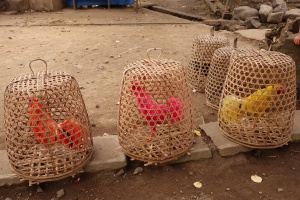 After a bad nights sleep- being woken up by the call to prayer at 4.30am, followed by 3 hours of barking dogs and crowing roosters- we went to the port to catch our boat. The boat was in relatively good shape and the seas were calm. Our boat had just the six 250 horse power engines (the boat next to ours had nine!) Once we boarded the boat there was an announcement with an English VoiceOver saying that safety cards were in seat pockets in front of us (there were no seat pockets) and that life jackets were in the overhead lockers (we looked up and there were no overhead lockers) but thankfully there were life jackets on the floor!
We had a relaxing few days on the Gilli Islands, staying on Gili Air, an island which was a breath of fresh air from busy Bali as there were no scooters and the only form of transport was by cidomo (horse and cart). We had some lazy days swimming in the sea and snorkelling across the reef. The sea was as warm as bath water so one day we sat in the sea and watched the sunset. The island was very dry and sandy and had not had any rain for 6 months, but on our second day the first rains arrived and we had a heavy downpour (the first real rain we’d seen since we left England) so we sheltered in a bar and had a beer. We did a day trip to another island- Gili Meno- and visited the turtle sanctuary, where we saw about 200 baby turtles that a conservation project was rearing for release. 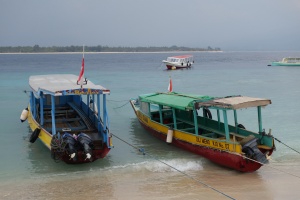 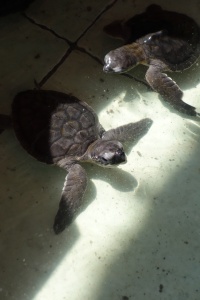 We had some great local food, including eating at Warung Muslim- a single table outside a lady’s house where the locals all came to get takeaway- and the next night eating at her son’s restaurant next door. It was run by a guy with a great sense of humour who joked that English people often say “wa’er” rather than “water” and who liked to say “lovely jubbly” a lot. Another memorable meal was on the beach where the low lights allowed amazing stargazing and some black cats came and meowed at us for food.
Although idyllic in many ways the island was not without it’s difficulties. It only had salt water for showers and suffered regular power cuts and we had no power for almost a whole day. We also had some friendly visitors to our outside bathroom. One morning when Kate went to pick up her swimming stuff there was a huge lizard was hiding underneath it! It was developed enough to have an ATM and on our last day we went to get some cash out and Alex said something he’d never said before at an ATM- “do you think a million will be enough?!”

Ok Dad, so we admit the Gili Islands were a bit like being on holiday, but the next couple of days definitely were not! From Gili Air, we took a boat to Lombok, drove halfway across Lombok to Praya, then flew to the island of Sumbawa, using Guruda one of only 4 Indonesian airlines that aren’t banned by the EU. If you’d like to know why we chose to fly this section of the trip rather than take boats and buses, have a quick read of the ‘Step by Step Guide to Indonesian Travel’- about half way down the page- on this blog, which we enjoyed reading…

On the flight we had stunning views from the plane across the Indonesian archipelago, with volcanic islands surrounded by black beaches and turquoise moats merging into deep blue sea. We were the only foreigners on our flight and our flight was full with the Hajj- a group of about 50 people in full religious dress who had been on a pilgrimage to Mecca to pray for 40 days. When our flight landed there were hundreds of people cheering and waving who had arrived to welcome them back and people wanted to shake our hands too as we got off the plane. We went through the ‘official’ passport check where the guy at the tourist information booth wrote our passport numbers in a note pad. We were the 6th and 7th foreigners to pass through the airport that week. He had a name badge identifying himself as ‘John Lennon’- somehow we didn’t think that was true! We struggled to get out of the airport doors with the huge crowd of people outside but managed to get out to the main road and hailed down a bus to take us to Bima. 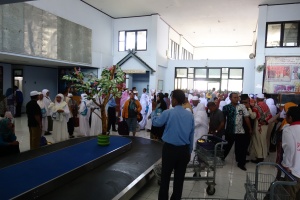 From there we found another bus to take us to Sape, which circled the town for about an hour first looking for more passengers and cargo, with a woman with a voice like Frau Farbissina from Austin Powers continually shouting “Sa-pe, Sa-pe, Sa-pe, Saaa-paaaay!” at the top of her voice. Sumbawa is a Muslim Island and is much poorer than Bali and Lombok. We stayed the night in the small port town of Sape- in what were apparently the ‘best lodgings in town’- a grotty room with a squat toilet and plug sockets that were fixed to the wall with masking tape and then painted over! The next morning we took a ferry to Labaunbajo. The crossing took 7 hours but the ferry left an hour late so we were on it for about 9 hours, sailing across the beautiful volcanic archipelago, with views of Komodo and Rinca islands on the way. Labaunbajo is our base for visiting the Komodo National Park. More on dragons and diving soon… 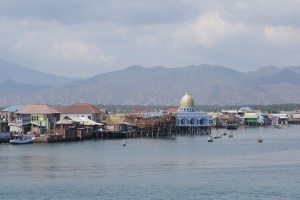