From Blitar we travelled to the cultural city of Solo, which is also called Surykarta. We took a becak to the bus station (which essentially consisted of 3 people 2 massive rucksacks and two small rucksacks packed onto a small motorised rickshaw where the driver could only partially see over the top!). Standard practice at Indonesian bus stations is to ignore anything the touts tell you about there being no buses, as it’s usually all lies. So we waited nearly two hours at a bus station before finally conceding that this time they might actually be telling the truth and decided to take a bus to Nganjuk (a town vaguely in the right direction, where we thought we could change to another bus to get to Solo). “We’re cooking on gas now!” exclaimed Alex as we pulled out of the bus station- very pleased to finally be on our way,- drove 5 meters and abruptly stopped just across the road for 30 minutes for the driver to have lunch, whilst everyone else on the bus had to wait! We then drove around the corner and we stopped yet again for him to get some snacks. Even the locals looked thoroughly annoyed by this point! We managed to connect with another bus and finally reached Solo about 10 hours after we had left. 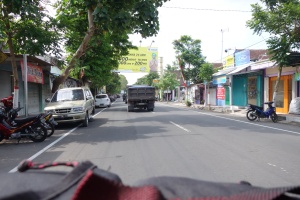 We spent a couple of days exploring the city making use of the grand shopping malls for various errands (having not really bought much since we left the UK) and learning about batik (a traditional process of decorating material using wax and dyes) at Danar Hadi. Alex got his haircut for 75p and after an unsuccessful mission to find some strong thread, Kate managed to find a tailor to mend a hole in her rucksack. We spent an evening unsuccessfully trying to see a traditional Javanese dance performance. After the taxi we booked to a big performance didn’t turn up, we decided to walk to a smaller local performance instead. The rainy season has arrived in Java and as we walked we got caught in a torrential downpour and the streets quickly turned into rivers. The water was above our ankles and our umbrellas were of little help. We finally found the venue only to be told the performance had been cancelled due to the rain, so we returned to our hotel defeated and completely soaked!

From Solo we travelled to Yogyjakarta (pronounced Jogjakarta). We arrived to the busiest place we’d been to in Indonesia, as Indonesian weekend tourists joined the hoards of locals, street vendors, street artists, cars, motorbikes, bicycles, becaks, and horse and carts choking up the main street of Jalan Malioboro. On our first night we went to to see Javanese puppet theatre where the Wayang Orang (the puppet man who controls all the puppets, provides the voices of the puppets and some sound effects using his feet!) is accompanied by a traditional gamelan orchestra. Perhaps an acquired taste that went on for 2 hours but felt like it lasted for about 4! The next day we visited the Kraton- the home of the Sultan of Yogyjakarta- to see the grand palace and to watch some traditional Javanese dancing. In the afternoon we explored the city. We have been surprised that people in the cities on Java are a lot more well fed than the other islands of Indonesia and we even went past an obesity clinic in Yogyjakarta. 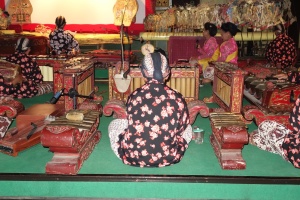 We did a day trip to Prambanan, Indonesia’s finest Hindu temple complex. Built in the 9th century, Candi Prambanan consists of 8 large impressive temples, surrounded by the remains of what was once another 250 temples. We spent the day at Prambanan and the surrounding grounds and also visited Candi Sewu, where we were the only people there and we felt a bit like we were on the set of an Indiana Jones movie! We realised we were properly into travelling that day when we were discussing how utterly ridiculous it was that some tourists were paying £3.50 to get private transport to Prambanan when you could get a public bus for just 15p!

Back in Yogyjakarta we did an excellent Indonesian cooking class where we went to a traditional market in the morning to choose our ingredients and then learnt to cook some classic Indonesian dishes, such as Gado Gado, Nasi Goreng, Sayur Lodur, Tahu and Tempe. Hopefully we’ll be able to do these dishes justice again when we get home (recipes available if anyone wants copies!) After a tasty lunch we took a bus to Borobudur. 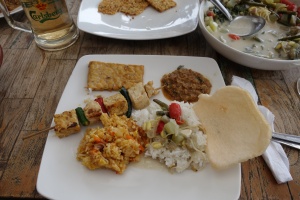 The next morning we visited the colossal Buddist temple of Borobudur. Built in the 9th century and then somehow lost for over a Millennium before it was rediscovered, the monument is covered with hundreds of ornate stupas, reliefs and Budda statues. It is so large, that by the time you have walked around each level you will have covered a distance of 5km! 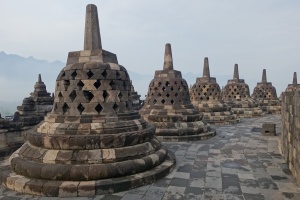 From Borobudur we continued our travels to the Dieng Plateau…