From Vietnam we took a flight to Luang Prabang in the North of Laos. Once the nations’ capital and now an important academic centre for monks; Luang Prabang is a lazy town on the banks on the Mekong River, which is festooned with ornate Wats (Monasteries) covered in colourful glass mosaics which glitter in the sunlight. Laos is well know for its laid back culture and friendly people and we immediately felt relaxed as we arrived. We spent a few days visiting the Wats and the Royal Palace and climbing to the summit of Phasith Hill for idyllic views across the Mekong. One morning we got up before dawn to witness the procession of Tak Bat; the traditional ceremony where locals (and now tourists) give alms to saffron-clad monks who walk silently through the town.

From Luang Prabang we took a two day slow boat upriver along the Mekong. We had two relaxed days on the boat watching the rural life pass by. Buffalo and cattle waded in the shallows, as fisherman cast their nets into the rapids. We also saw a few locals bringing their elephants down to the river for bathing. During the trip we stopped at the Pak Ou Caves which were dark and full of Buddha statues that you had to illuminate by torchlight. On our second day we visited a riverside village and our guide handed out note pads and books to the children in the village. Our Mekong river trip ended in Huay Xai, which is right on the Thai border. From there we had two full days of bus travel; day one to Udomxai and then on to the Northern hilltop town of Phongsali. 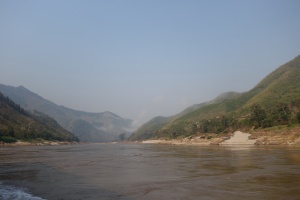 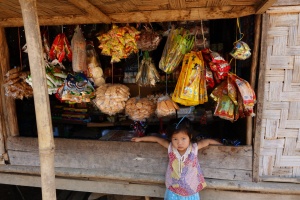 The bus trip to Phongsali was an adventure in itself. Bus journeys in Laos are notorious for taking hours (and frequently many more hours than advertised!), as roads are mountainous and often unmade. To reach Phongsali was 10 hours on a mountain road through remote villages. If you are interested to see the journey we made, it is shown in this You Tube video, https://m.youtube.com/watch?v=y9teb0YDf2A (although luckily a large proportion of the road has now been (sort of) paved and we didn’t have to pull the bus by hand using a rope!) Having arrived an hour before the expected departure time to secure seats, our bus was over an hour late leaving and then spent the usual additional hour circling the town to collect extra cargo, including 100 crates of cigarettes, 6 double mattresses and a random drunk guy who kept falling off his plastic stool in the aisle and vomiting into plastic bags. The locals thought he was hilarious and we were just glad that he wasn’t sat next to us! We arrived in the dark and after finding the guesthouse we were aiming for was full, we then checked into a hotel which was reminiscent of the Bates Motel in Psycho, with flickering lights in the dingy hallway, cockroaches climbing the stairs and the worst bathroom we have seen on our travels. Accommodation in the town was pretty basic and the next day we moved to the “best hotel in town” which scored a whole 1.5 stars out of 5 on Trip Advisor! 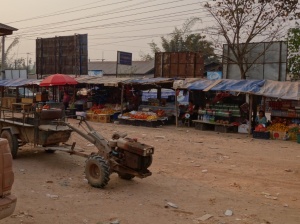 We didn’t visit Phongsali for the accommodation though, but for the fascinating treks to remote hill tribe villages. Ours stared out with an unexpected visit to a primary school. Our guide asked the teachers if he could teach the class and we sat in on a lesson, whilst he taught the children some key principles of education and some basic English. The kids seemed to enjoy his interactive methods and they kept looking at us with shy smiles throughout the lesson. From there we walked to Namleng village to visit the Akha Oma tribe. The Akha women still wear their traditional dress and wear elaborate head dresses adorned with silver coins obtained during the French colonial era. Kate had a Penny in her bag and gave it to the locals. Laos no longer has coins in circulation so the locals were fascinated by it and a woman signalled to us that she was going to add it to her traditional headdress! The Akha people still genuinely believe that if you take a photo of them you will steal their soul, so sadly we weren’t able to take a picture of them. Below is a picture of the outfits the Akha women wear on a daily basis, taken at the Phongsali Museum of Tribes, but if you want to get a better idea of what our hosts looked like, then search for ‘Ahka images’ on Google.

Whilst at Namleng village we were invited to sit with the locals on tiny wooden stools and drank some of their local rice whiskey. The whiskey was over 50% proof and it was only 9.30am in the morning! Not wanting to offend our generous hosts, we drank a few large shots of whiskey and joked with them that we would be walking in a drunken meander for the rest of our trek. They laughed and it made for good banter, but the next section of our trek was very steep and difficult to navigate and we could certainly feel the effects of the whiskey whilst we were walking!

After some incredibly tough trekking through steep hillsides and ravines, we stopped at the village of Kordeng, where we had lunch with a local family of tea farmers from the Phounoy tribe. We took food and cooked with them on an open fire inside their one room wooden house and then ate with them. Lunch was a simple affair of sticky rice, greens in a soup and some rather hard pork. We also tried some local ‘treats’ of bitter bamboo (which was incredibly bitter and tasted like you were eating charcoal) a sour fruit like tamarind that was so sour you needed to eat it with salt and a fruit that was like a very powdery/ chalky date which was eaten with sticky rice. After lunch the 50% proof corn whiskey came out and again not wanting to offend, we had another two large shots before continuing with our trek!

We continued on to a 400 year old tea plantation which is thought to be one of the oldest in the world and then to the village of Ban Chaphou. Our guide told us that we trekked 35km that day. We weren’t sure if it was definitely that far, but with the steep ascents it definitely felt like it! We got on well with our guide Mor and that evening he invited us to go to his house for dinner with him and his girlfriend. He was writing a book to teach English to Lao children and we helped him with some of the translations and a few of the grammatical points. The next day we took the long bus journey back to Udomxai…