From Beijing, we took the Trans-Mongolian sleeper train to Ulaanbaatar. We were lucky to share a cabin with a Mongolian Ambassador who spoke good English and taught us a huge amount about the country and the culture. At about midnight we reached the border. Trains in China and Mongolia have different gauges, with the Mongolian tracks being 85mm larger than the Chinese ones. As our train was destined for Moscow, the train needed to have a full engineering operation. They lifted the carriages up on hydraulics (with us still in them!), removed the wheel-sets (bogies) and then attached new ones for the Mongolian gauge. After a long few hours at the border we finally crossed into Mongolia, where we had to stay awake for more passport checks and didn’t get to bed until 2.30am in the morning.

Overnight we crossed the Gobi and we awoke to the fringes of the desert and the vast grasslands of the Mongolian Steppe. The steppe covers a colossal area of 890,000 square kilometres of unfenced land; which stretched as far as the eye could see and was dotted with herds of camels, horses, cows, sheep and goats. Amongst the herds were the lone Gers of nomadic families and large birds of prey circled overhead. After travelling through hours of wilderness, we watched Ulaanbaatar rise into view. It is a city unlike any we had ever seen before, with modern high rise buildings in the centre, but vast tented Ger camps surrounding the city. 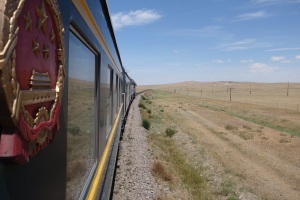 The next day we set off on a 6 day adventure to the Gobi Desert. We drove south and quickly went off road across the vast open grasslands. We were to drive over 1000km off road on our trip and spent many hours in the back of an incredibly bumpy van. Of course, there were no seat belts, so you had to keep holding on and bracing yourself for most of the drive, so you didn’t hit the ceiling or end up on the floor! We drove for over 5 hours across the Mongolian Steppe without seeing a single fence or permanent building, just a handful of nomad’s Gers. We stopped for the night at a nomadic family’s Ger and we stayed with a different family for each night of the trip. The Gers were fairly basic inside and had no running water. Toilets were holes in the ground; if we were lucky with walls and if we were even luckier, with a door! 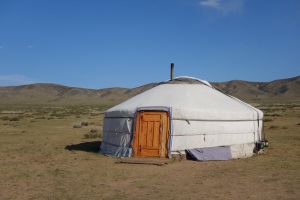 On day two, we had a long bumpy drive south to the Gobi Desert. As we drove, the grasslands became increasingly arid and herds of cattle gave way to herds of camels. Mirages and the vast landscape played tricks on our eyes. What we thought was a village on the horizon, turned out to be a herd of camels. Gradually the grasslands gave way to a desolate sand-scape and animal skeletons were a stark reminder of the harsh environment we were entering. We got lost and had to ask directions at a nomad’s Ger, where we met their baby camels. After a long drive we finally reached the Flaming Cliffs, an impressive set of red sandstone rock faces, where paleontologists have recently found dinosaur bones and eggs. That night we stayed in a Ger camp on the edge of an area of Saxaul Desert Forest. 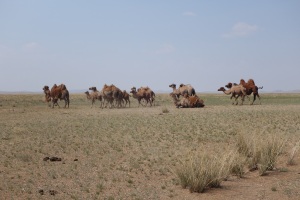 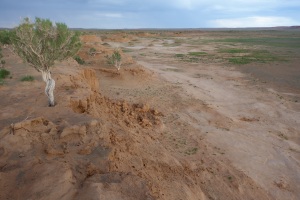 The next morning we awoke to a flash flood. Amazingly, deserts are some of the most susceptible areas on Earth to flooding and a whole lake had formed near our Gers, which wasn’t there the night before! Nearby a van had also got stuck in the mud and had to be dug out by locals. We travelled all morning to reach the Khongor Sand Dune, which is over 800m high and stretches for 180km. We spent the afternoon riding camels, which was a bit like riding a horse, only much higher up. Alex’s camel decided to stand up whilst he was getting on and he was left hanging off the side and had to haul himself up whilst the camel was walking off. He also got covered in camel snot, after Kate’s camel sneezed all over Alex! 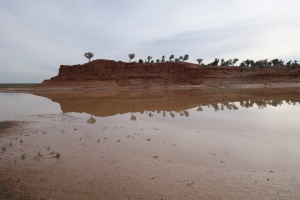 That evening we climbed the colossal dune. The climb was incredibly tough, as every step you took, you slipped back two more steps into the deep sand. The only way to get up, was in short bursts whilst almost running and we both felt physically sick due to doing the climb so soon after dinner. We reached the top just in time for sunset and the hard climb was worth it, as we were rewarded with incredible vistas across the desert. That evening we saw the most amazing display of stars we had ever seen. There is no light pollution in the Gobi and the night sky was carpeted with thousands of stars. We sat out with some beers gazing at the Milky Way and watched shooting stars and satellites circle the Earth. At about 1.30am, we watched an enchanting moon rise on the horizon. 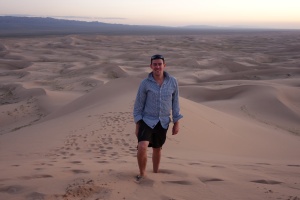 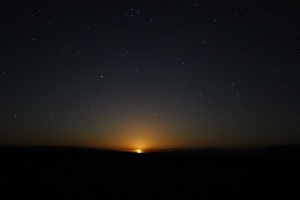 From Khongor, we travelled to Yol Valley, where we walked through a ravine and saw something we hadn’t expected to see in the desert- a glacier! The valley was full of Pikas (small mammals) which scampered in and out of holes all along our walk. That evening we tried some Airag, which is fermented mare’s milk. It is a local delicacy that is drunk around the time of the Naadam festival. It tasted like slightly congealed, extremely sour milk that was a good two weeks past its sell by date. We just hope it tastes better for the foals when they drink it! 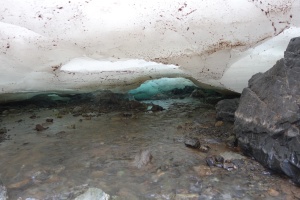 The next day we travelled North to the Middle Gobi, where we visited the Baga Gazriin Chuluu Granite Rock Formation. We spent a couple of hours clambering around the rocks and then played some football with our nomad hosts for the night; with the children using the Gers as goalposts. We had a really great group of people on our tour and we finished our six day trip by playing some Korean drinking games (as well as some English, Canadian, American, Puerto Rican and French ones!) late into the night. 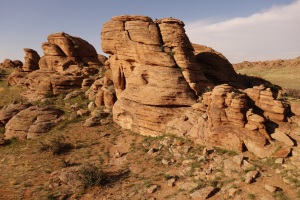 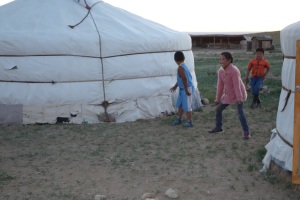 The next day we returned to Ulaanbaatar, ready to start our next Mongolian adventure…