After an eventful border crossing, we reached Siem Reap in Western Cambodia. Cambodia is a fascinating country, whose ancient history is one of power and grandeur but whose recent history has been scarred by the genocide under the rule of the Khmer Rouge during the 1970s and the 20 years of guerrilla warfare that followed.

From Siem Reap we visited the impressive temples of Angkor. We started at Ta Phrom, which was built in 1186, but was subsequently abandoned and devoured by the Cambodian jungle. Huge tree roots have grown through walls, encircled statues and burst through paving. The crumbling towers are covered with a carpet of moss and strangled by creepers and the temple is the location where the film Lara Croft: Tomb Raider was shot. We visited numerous temples in the Angkor complex, but Bayon was one of the most impressive. It has 54 towers with 216 stone faces of King Jayavarman VII, staring down from every angle. On our second day, we got up early and joined the tourist circus to see the sunrise at Angkor Wat. The building is staggering, with an outer wall measuring over a kilometre and it is recognised as the largest religious monument in the world.

We went to a number of other sites around Siem Reap, including the Banteay Srei Temple, a Butterfly Centre and the Cambodian Landmines Museum. Cambodia has a huge problem with unexploded ordnance; firstly due to the USA bombing the Ho Chi Minh Trail during the Vietnam War (it is thought that the USA dropped more bombs on Cambodia during this period than the Allies dropped in the whole of the Second World War!) and secondly due to 20 years of guerrilla warfare from the Khmer Rouge. 40 years on, there are thought to still be over 6 million active landmines across Cambodia and sadly every 5 days, one person dies and one person becomes an amputee. Many countries, including the UK have now signed an international agreement to stop using landmines. Unfortunately, others including the USA and Russia have not.

From Siem Reap, we travelled to Battambang. Despite being able to get there a lot quicker by bus, we opted to take a (very) slow boat instead. The trip took 9 hours but was a captivating cruise through kilometre after kilometre of Cambodian rural life, interesting wildlife and floating water villages. It was fascinating to see the floating villages and to watch the locals’ ingenious fishing contraptions and floating houses, schools and shops. We even saw somebody literally moving house (see below!) 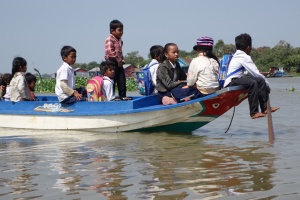 We spent a couple of days in the town of Battambang and from there we took a ride on the Bamboo Train. After the Khmer Rouge shut down the railways, locals built new trains to use on the rails, consisting of two axels with wheels (wheel-sets) and a bamboo platform. The train goes at about 15km per hour, which feels pretty fast when you are so close to the ground! If you meet another train coming towards you, the etiquette is that the train with the least passengers takes everything off the platform, removes the engine, bamboo platform and two wheel-sets, lets the other train through and then has to put the whole thing back together again! We also did some wine tasting at a local vineyard. The wine we tried was more like a fortified mulled wine and was somewhat of an acquired taste!

From Battambang, we took a bus to the Cambodian capital, Phnom Penh…